Oswald was a 7th Century King who, with St Aidan, introduced Christianity to Northumbria. The village of Kirkoswald (about four miles south of Maybole) takes its name from the church that was built following St Oswald’s victory in battle there. St Oswald died in battle on 5th August in the year 642.

The Scottish Episcopal Church
In 1689 the Episcopalian clergy were ‘rabbled’ (forcibly removed) from their churches and manses and had to meet in secret, (similar to the Covenanters just a few decades before) and the Presbyterians became the established church of Scotland. Supporters of James II were called Jacobites, and after his death, they wanted his son ‘The old Pretender’ and his grandson ‘The Young Pretender’ to be brought back as King. The Episcopalians, in the main, supported the Jacobite cause, and when that cause was finally defeated at Culloden in 1746, they suffered the destruction of their churches and further penal restrictions against their clergy. Episcopalian services were held at Culzean Castle, and for a while, there was a chapel in Ayr, but it closed in 1746.

In 1847 the Rev William Scot Wilson who was the rector of Holy Trinity, Ayr, started an Episcopal church in Maybole. The congregation were English and Irish weavers who worked in the main industry of the town at that time, working with handlooms in their homes, making fine cloth. There were 400 Episcopalians in poor and humble circumstances, as recorded by the Parish minister. As the weaving industry declined, workers turned to shoemaking in the town.

For many years the congregation met in a room on Abbot Street and were served by the clergy of Girvan, where the church had a similar background. 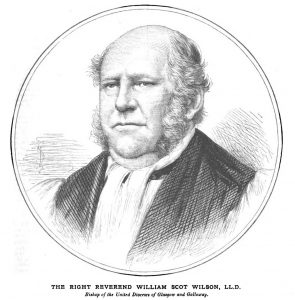 By 1883 the congregation had established itself and a school. The Rt Rev William Scot Wilson, who was the bishop by that time, agreed to the building of a church on land gifted by the Cassillis Estate, and the Marchioness of Ailsa is believed to have been a benefactor. The minister to the congregation was William R Gallacher, Rector in Girvan. Throughout its life, St Oswald’s Church has been served and linked with the clergy of Ayr and Girvan, with two periods of having its own rector. 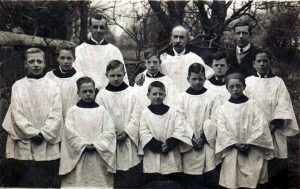 The pretty little church, seating 60-70 people, is a simple Gothic village sandstone church, built close to the Gardenrose Toll on farmland. The railway had been constructed in 1857 and the surrounding houses were built some years after the church. The church was bounded by the original field hedge until the modern garden wall and landscaping for disabled access was built in 2001.

Originally there was a metal bell frame on the west gable, which was removed in the First World War as part of the scrap metal campaign.

The church interior is simple and tranquil, with ordering that reflects contemporary Episcopalian tradition and worship, laid out to the liturgical compass of chancel to the east. From old photographs of the church, it is evident that there had been some changes before the Second World War when the timber pews replaced the original chairs and the reredos was altered. The church was last re-ordered in the late 1970s when the chancel was cleared of choir stalls, the altar brought forward and reredos and pulpit removed. 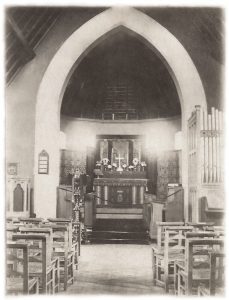 In June 2017, St Oswald’s became an independent charge with the Rev Jim Geen appointed Interim Priest-in-Charge. This meant that the South Ayrshire Team of Holy Trinity, Ayr and St Oswald’s, Maybole came to an end, allowing both churches to appoint their own clergy. 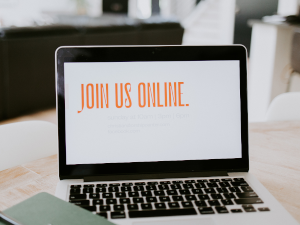 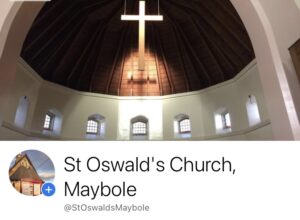